Wacky concept car builder Rinspeed is at it again, this time showing its latest creation, the Rinspeed Etos, away from Switzerland for the first time – at the 2016 Consumer Electronics Show (CES) in Las Vegas. Like the Budii before it, the new self-driving car is based on a BMW i model, this time the RM1.2 million BMW i8.

It’s inside where the Etos is a real departure from the car on which it’s based. The i8’s swooping dashboard has been replaced by twin rectangular “shelves,” with one of them storing the ZF TRW steering wheel when it is folded away in autonomous mode. There’s also a self-winding Patravi Traveltec mechanical clock, with an integrated camera for video calls. Twin curved 21.5 inch Ultra HD displays are connected to the Harman infotainment system, which aims to reduce distracting manual inputs by learning and anticipating the occupants’ needs and proactively offers suggestions all on its own. If need be, the system can also be controlled through voice commands, gestures, touch, a controller or the push of a button.

Elsewhere, there’s wireless smartphone charging, NFC connectivity for conducting automatic payment for parking, as well as an on-the-go transaction system for secure payments. The front bucket seats are embroidered with the San Francisco skyline; at the rear, the BMW’s near-useless pews have been jettisoned in favour of a luggage shelf with a detachable umbrella holder. 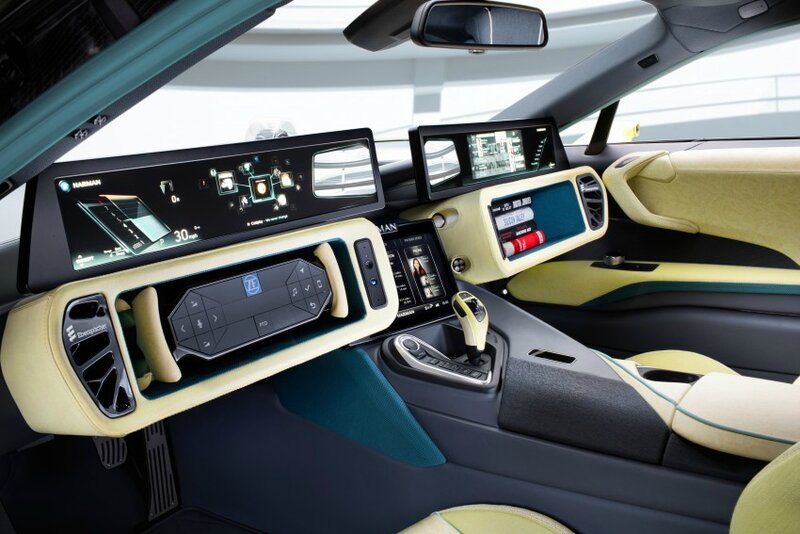 The real party piece is on the rear deck, where the Etos has a landing pad that doubles as a large display, made – as with the roof – from Corning Gorilla Glass. That pad is for a DJI drone, which Rinspeed says can do errands such as collecting flowers for a significant other, as well as taking selfies while on the road.

Replacing the traditional exterior mirrors, eight HD cameras provide a 180-degree view of the front and rear of the vehicle – displayed on screens inside the car, they completely eliminate blind spots. Eye-tracking enables the Etos to recognise what the driver may or may not have seen, tailors the displayed warnings and notifications to suit, and enables the exterior views to be displayed only when the driver is looking at them.

Autonomous driving is enabled through the precise mapping of roads and lanes, along with radar and car-to-x connectivity – the Etos can connect to traffic infrastructure, traffic management systems and other cars, and allows drivers and the car itself to “see” over the horizon and through obstacles. This, for example, enables the car to drive all the way in sync with phased traffic lights.