On 7 July 1964 the Daily Express published a satirical cartoon, a send-up of Britain’s farming community as it struggled to adapt from its old, rustic world to a new, technological one. The cartoon was set at a Royal Show at a point in the near future. One side of the frame featured a rowdy beer tent, reserved for “drivers and drivers only”. On the other was a marquee with the sign: “Order your Radio-Controlled Tractor”. A driver leans over to his beer-slugging mate. “Bert, I don’t want to depress you”, he cautions, “but your governor’s just bought one of those new tractors that don’t need a driver.” 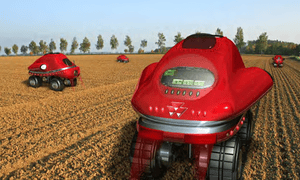 The Express cartoon was recently cited by Professor Simon Blackmore, the head of engineering at Harper Adams University in Shropshire, to demonstrate the progress the farming community has made over the last 50 years. The ludicrous has now become the commonplace.

Ian Beecher-Jones, a precision farming consultant, recently told Farmers Weekly magazine that about 60% of Britain’s farmland is now being managed by precision methods, which include sensor systems, cameras, drones, microphones, virtual field maps, analytics and GPS-guided tractors. These technologies – examples of the so-called internet of things – are fuelling what is being called the “new agricultural revolution”.

Commentaires sur Drones and driverless tractors – is this the future of farming?