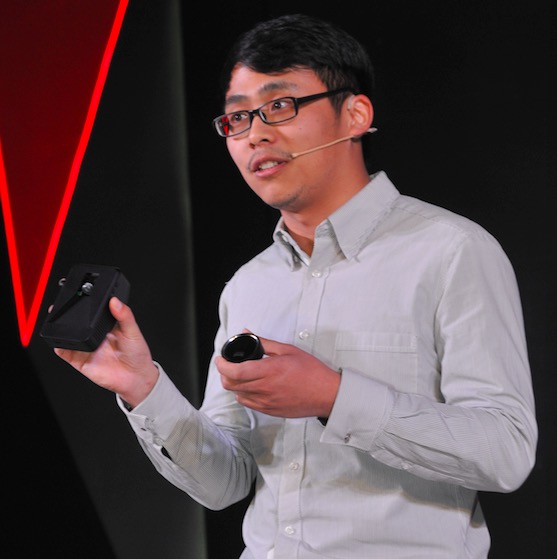 The products tested for benchmarking this time are aftermarket products. In Liu’s opinion, the aftermarket sector would be a better realm to kickstart the business since it spares the company from the complicated pre-market automobile R&D process.

Mobileye achieved a very competitive revenue volume in the aftermarket sector in Q3 this year and MINIEYE is hoping to set a disruptive pricing for its products so as to ensure a cash flow in time. After showing its products to the public in late 2016, MINIEYE has received groups of orders from the aftermarket sector. Liu Guoqing revealed to TMTpost that the final pricing would be around ￥2000-￥3000 and the aftermarket products equivalent to Mobileye’s could be priced at up to ￥10,000.

Aftermarket products include gadgets that are common in the market like automobile data recorders with ADAS features, rearview mirrors, HUD etc. These products can achieve some functions but lack response speed and full functions. In addition to that, auto makers tend to push away aftermarket products by installing many protection measures to keep aftermarket product providers from breaching the internal data protocol of the cars. This results in the fact that it’s hard for aftermarket products to have access to the data inside the car, which keeps the car from becoming truly intelligent.

Of course, MINIEYE wants to do so much more than that. As a ADAS technology provider, MINIEYE has to cooperate closely with auto makers in order to get a share of the greater autonomous driving market. The startup would need to penetrate the pre-market sector and deal with the protocols of the cars to achieve data flow and intelligence.

Aftermarket products generate cash flow, but MINIEYE has been focusing on the premarket sector. It’s learned that MINIEYE has signed a technology development contract with General Motors and is teaming up with Xiaopeng on vision sensing. On the recent symposium MINIEYE also formed a partnership with Wanxiang Tech to develop AEB technology. The pair’s product will be put into mass production in 2018.

This startup aims to find itself a place in the ADAS technology solution market, which is very ambitious.

Whether it’s for autonomous driving or ADAS, the sensors are the crucial part. There are two sensor solution: One is lidar, the other is vision sensor, which is the realm that ADAS companies like MINIEYE belong to. And these companies mainly adopt the camera-based solution.

Google and Baidu on the other hand adopt the lidar solution, which is less affected by the weather but much more costly. And high cost means more difficult to be mass produced. TMTpost found that a 64E lidar cost around ￥700,000. Compared with that, cameras are so much cheaper. Camera sensors also have some advantages in image, figure, and sign recognition.

A group of ADAS teams in China saw the potential and entered the market with low-cost camera solution. For example, we have SmarterEye and JMADAS etc. But we don’t have any company that entered the market through the premarket sector. Premarket products have longer R&D period and require more coordination, making it a harder field to crack. And more importantly, overseas component giants have monopolized this market.

The benchmark results show MINIEYE’s alarm rate has reached Mobileye’s 95%. So is it possible that it can penetrate the premarket sector in China?

“GEELY is an independent brand and we would like to adopt local providers’ technologies. As many might know we are still mainly using products from overseas. They are still trying to understand our demand,”Liu Weiguo, president of GEELY Research Center said. “We are developing fast, and we do need local providers’ products. But it doesn't mean we reject products from big brands. It really depends on whether the products meet our demands.”

MINIEYE’s founder Liu Guoqing believed that their shot lies in the fact that there isn’t any local company in China that focuses on the ADAS premarket sector. But we can’t overlook the fact that Chinese brands find it hard to import ADAS technologies due to the limitations presented by the pricing strategy.

Considered the cost structure, some car makers would also go for the batch purchase approach when it comes to ADAS for some high-end car models. And this market is monopolized by overseas companies. The largest car component provider BOSCH made a revenue of 70.6 billion euros last year, with its automobile accessories taking up about 60% of the revenue. BOSCH itself also has its own ADAS solution and its dual camera solution is also competitive in some other ways when compared with the mainstream single camera solution.

Aside from that, MINIEYE’s benchmarking rival Mobileye has been around for years. Founded in 1999, Mobileye now accounts for over 90% of the global market share and has partnered with many component giants, including BOSCH’s nemesis Delphi. Delphi revealed to TMTpost that they won’t consider low-cost technology providers in the short run considered the safety of ECU technology.

Furthermore, MINIEYE and Mobileye both adopt single camera solution, which is better at sensing distance and easier to produce. However, such solution requires model building and data accumulation to work. That’s where Mobileye’s years of experience and accumulation comes in handy as it has formed an enormous data base. Additionally, Mobileye’s self-developed processing chip has a rather competitive pricing. According to Tang Rui from Congmu Tech, the cost of Mobileye’s chip is around only $30.