Autopilot controls are not yet fully capable of functioning without human intervention – but they’re good enough to lull us into a false sense of security. 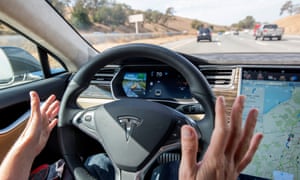 When California police officers approached a Tesla stopped in the centre of a five-lane highway outside San Francisco last week, they found a man asleep at the wheel. The driver, who was arrested on suspicion of drunk driving, told them his car was in “autopilot”, Tesla’s semi-autonomous driver assist system.

In a separate incident this week, firefighters in Culver City reported that a Tesla rear-ended their parked fire truck as it attended an accident on the freeway. Again, the driver said the vehicle was in autopilot.

Commentaires sur Who's driving? Autonomous cars may be entering the most dangerous phase