The ADAS Market (advanced driver assistance system) is estimated to be USD 30.0 billion in 2019 and is projected to reach USD 134.9 billion by 2027, at a CAGR of 20.7% during the forecast period.  ADAS technology improves the driving experience, while enhancing the vehicle and pedestrian safety. It is becoming an integral part of modern automobiles and is being adopted in passenger cars as well as commercial vehicles. 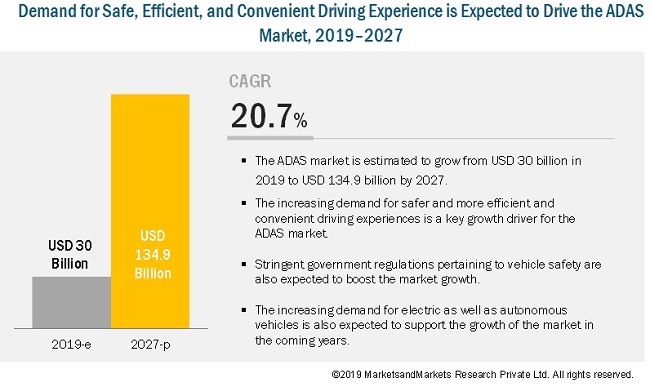 “AEB segment to hold the largest share of the ADAS market, by system”

Governments of developed countries have mandated the fitment of AEB in buses & trucks. For instance, Regulation No 661/2009 of the European Parliament and of the Council (dated 13 July 2009) mandated the inclusion of AEB system in buses & trucks. It also stipulated the standard fitment of LDW in the same vehicle categories and with the same deadlines as autonomous emergency braking systems. The system is expected to be equipped in all new commercial vehicles above 3.5 tons and buses from November 2013, and in all vehicles of these categories sold in the European Union from November 2015. In 2018, the South Korean government mandated AEB from January 2019 in all new passenger vehicles. These mandates will drive the growth of the AEB market in the near future.

“Software: The fastest growing offering type of the ADAS market” 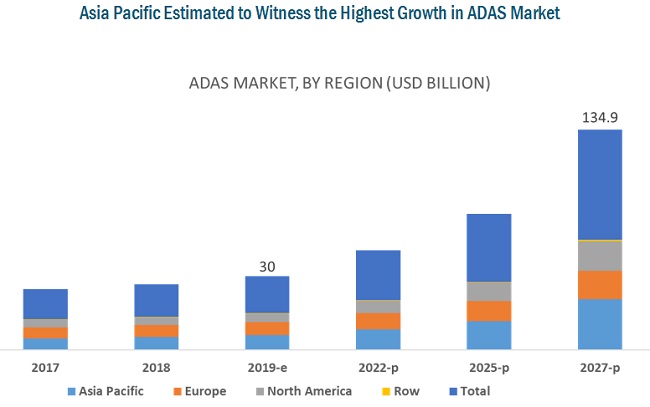 Safety features have become an important prerequisite for automotive consumers across the world. Most of the accidents are caused by driver distraction or lack of concentration due to drowsiness. The demand for ADAS is increasing at a rapid pace, especially in emerging countries such as India and China. The increased demand for safety systems in the emerging markets can be attributed to the improving road safety standards, supporting legislation, and consumer awareness.

Rise in the demand for a safe, efficient, and convenient driving experience

The automotive industry is witnessing a rapid evolution of safety features. The growth rate of safety features is expected to increase exponentially in the coming years. The main objective behind the implementation of these features in the vehicle is to provide a safer, efficient, and convenient driving experience.