A new laser-based system could allow vehicles to ‘see’ obstacles before they come into view, scientists say. 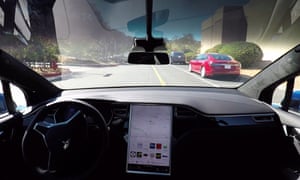 Whether it’s a child running after a ball, a herd of cows or a broken-down car, unexpected obstacles can prove deadly to drivers. But scientists say the cars of the future might be able to anticipate such perils.

A team of researchers have come up with a new laser-based system that efficiently produces images of objects that are hidden around a corner – a development they say could allow autonomous vehicles to see obstacles before they come into the line of sight.

“There is this preconceived notion that you can’t image objects that aren’t already directly visible to the camera – and we have found ways to get around these types of limiting situations,” said Dr Matthew O’Toole, a coauthor of the research from Stanford University.

The approach builds on technologies such as Lidar, a tool used in archaeological mapping that involves sending laser pulses towards a surface and measuring the time it takes for light to be reflected. This data is then used by scientists to build a three-dimensional model of the surface.

But the new technology takes the idea further, using lasers to see around corners. “It is almost like magic,” said O’Toole.