The total installed base for new vehicles with in-vehicle infotainment, or IVI, systems is expected to grow 30% in 2019 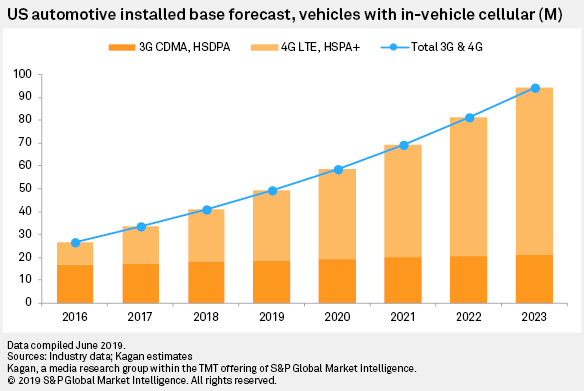 Cars with 5G wireless technology are in the testing phase, and with low latency and faster downloading speeds, the connected car could be one of the biggest beneficiaries of the new wireless standard. But first, local administrations and telecom companies must build the infrastructure for 5G to prosper. 5G is still a few years away for connected-car manufacturers who want to provide the technology in their vehicles, and a hybrid 4G/5G system is more likely.

Connected cars certainly offer more than just added entertainment in the dashboard. Cellular vehicle-to-X, or C-V2X, technology encompasses the connecting of vehicle sensors to driving data such as speed, location, traffic, other cars, and anything else that could be conceived in this driving ecosystem.

At the January 2019 CES show in Las Vegas, Ford Motor's connected-car Director Don Butler said the company will equip the entire lineup of Ford cars with 5G modems in anticipation of a 2022 rollout, despite the industry standard for 5G connected automobiles being still undecided.

The installed base of U.S. vehicles with embedded in-vehicle cellular (3G/4G LTE) systems reached nearly 41 million by year-end 2018, an increase of 22% year over year from just over 33 million in 2017. Most of the estimated in-vehicle cellular installed base in 2017 was made up of basic 3G telematics systems, but in 2018 the 4G LTE installed base surpassed that of 3G. The introduction of 5G wireless networks will negatively impact 3G in connected cars as automotive original equipment manufacturers, or OEMs, increasingly move away from the older, limited-ability bandwidth.

While 5G networks' transmission speeds help vehicle-to-vehicle (V2V) and V2X communications by boosting efficiency and safety, the auto industry must innovate around the technology for mass-market adoption. 4G LTE is expected to be the primary connected-car wireless network, which we estimate should surpass 80% of total in-vehicle cellular systems in 2024. 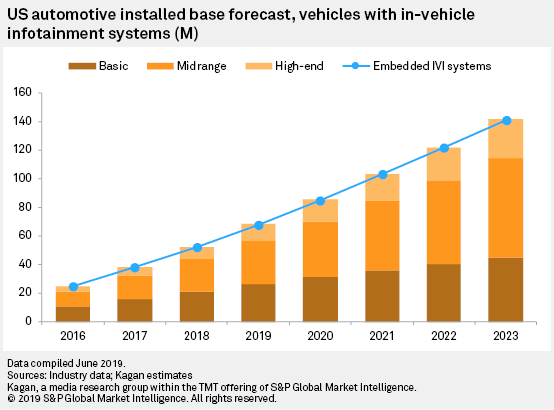 The total installed base for new vehicles with in-vehicle infotainment, or IVI, systems is expected to grow 30% in 2019 as reliability and usability continue to improve as automakers make strides in creating proficient connected-car systems for consumers.

Among the wireless providers, AT&T Mobility is the leader in terms of connected-car support. In 2018 we estimate AT&T added over 8 million connected cars to its network, a 25% increase from just over 6 million net adds in 2017. In the first quarter of 2019, we estimate AT&T added just over 2 million connected cars, up over 13% from the first quarter of 2018.

Toyota Motor Corp. has been the most notable holdout against external software makers for years, but the automaker announced early in 2019 that 2020 models of the 4runner, Tacoma, Tundra and Sequoia will feature Alphabet's Android Auto. With nearly every auto manufacturer offering some form of one or both of Android Auto or Apple's Apple CarPlay, it is likely Toyota could not develop a connected dash to compete with the two heavily funded and frequently updated platforms.