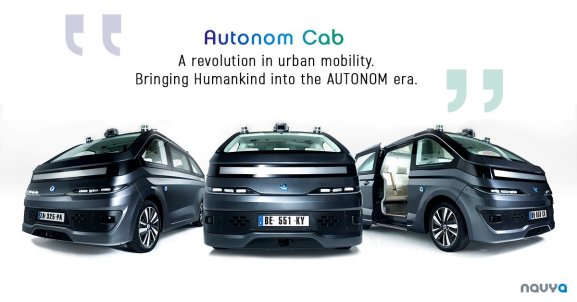 Navya, a French company known for its self-driving shuttles, has taken the next step in autonomous vehicles by introducing a self-driving cab.

At a splashy even in Paris, the company rolled out the Autonum Cab, a Level 4 autonomous vehicle designed without any interior features that would allow a human driver to take control. In other words, there is no steering wheel, mirrors, or brakes.

The company has been testing these vehicles on the streets of Paris and says it is ready to start shipping them. That would seem to put it one step ahead of Alphabet’s self-driving car unit, Waymo, which just announced testing of its own taxi service. Unlike Waymo, Navya wouldn’t operate the actual service, but rather wants to sell the taxis to local partners who would oversee the transportation network.

Still, the twin announcements are the latest reminder that vehicle autonomy is racing ahead further and faster than many would have predicted just a few years ago.

“Since its creation, Navya has been listening to cities and the mobility market,” said CEO Christophe Sapet, in a statement. “Today, it is clear that the status of the individual car has changed, especially among younger generations. Fewer and fewer young people have their driving license and [they] are less attached to the concept of an individual vehicle. What they want is mobility solutions that are operational 24/7, guaranteeing their safety and well-being at a reduced cost of use.”