As an alternative to building fully autonomous passenger cars, a number of private companies are working to field self-driving electric shuttles and buses.

Momentum in auto tech is at an all-time high, with investors funding private startups in the field at a record pace. Of course, much of the buzz has revolved around autonomous driving software, with startups like Zoox seeing $200M funding rounds, tech corporates looking to capitalize, and major automakers working feverishly to catch up.

Validating the reliability of fully autonomous vehicles will be no small feat, with RAND estimating that tens or hundreds of billions of test miles might have to be driven to properly gauge their safety. While many players are meeting this challenge head-on, a number of other startups are also developing autonomous tech for more focused applications.

Using the CB Insights company comparison tool, we compared five such private companies that are working to field different types of autonomous shuttles or buses.

This comparison was originally published in July 2016 with 4 companies. 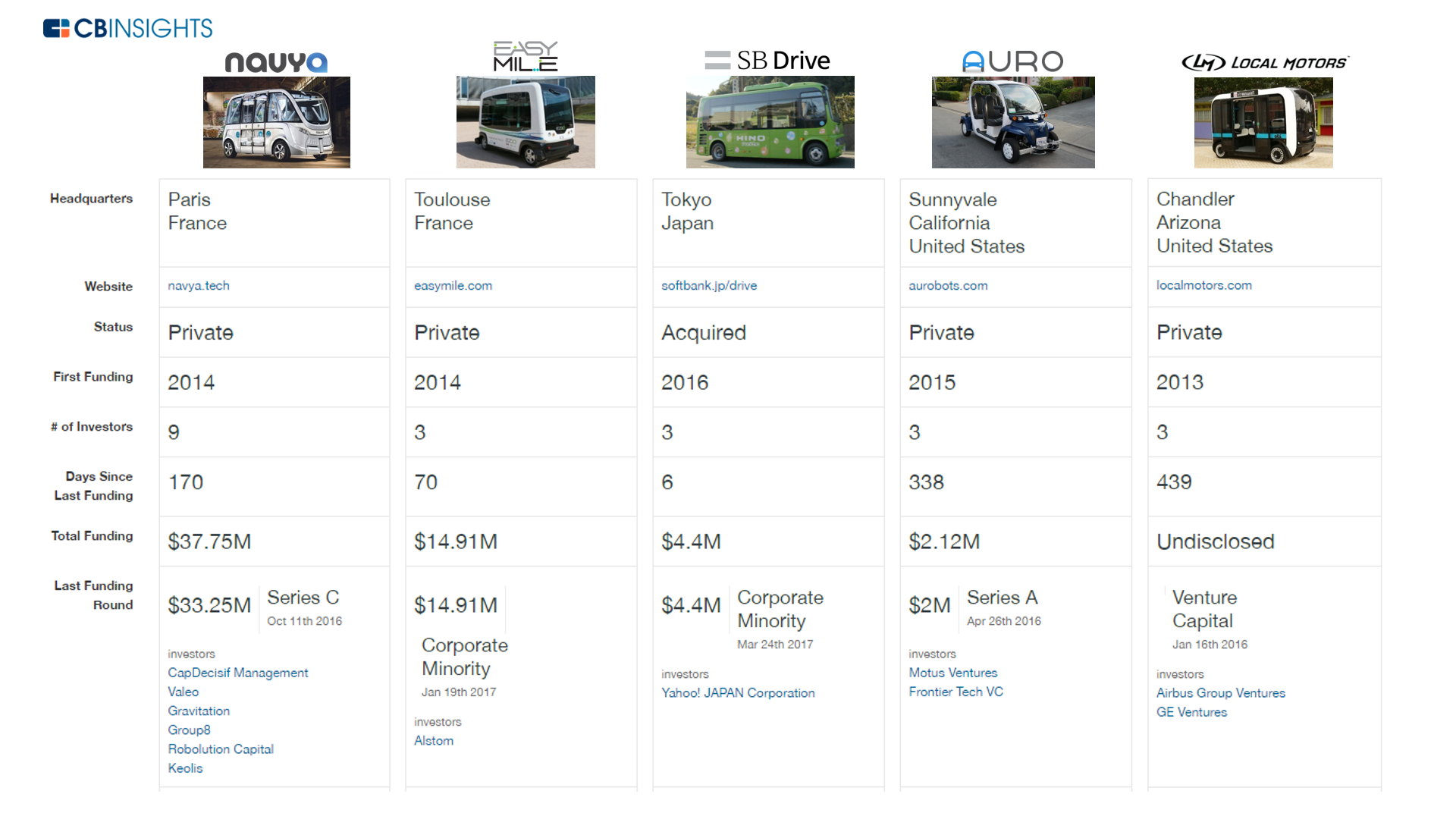 These companies are working on a number of different concepts, but they are all running at least one program to develop a bus or shuttle with self-driving capability (and all but SB are building around electric powertrains). Most are being designed to operate on predefined routes or geofenced locations, such as corporate or university campuses, or last mile travel between transport hubs and final destinations. These fenced environments should present a more surmountable hill than the challenge of open-world driving, reducing the number of extreme edge cases that they would have to account for.

Two of these companies hail from France, including Navya and EasyMile. Navya has developed a 15-person bus called Arma, which has already been deployed to a number of geofenced sites in France. The company counts key strategic backers from auto supplier Valeo to French transport giant Keolis. Navya has pushed abroad as well, partnering with Las Vegas to launch a free pilot of its bus during CES 2017, also launching its first US office in March 2017 (located in Chicago).

EasyMile, a joint venture between France’s Ligier and Robosoft, has also fielded its EZ10 bus, designed to travel along “virtual lines” that it can repeat continually. The company’s California tests may be the first self-driving trials in the state without a steering wheel or human operator.