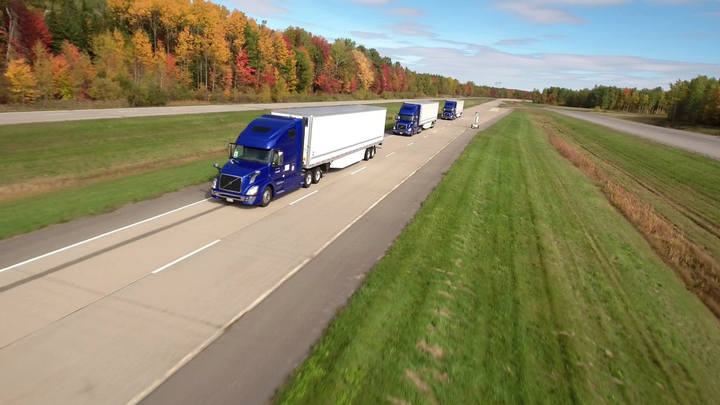 A new report predicts fully autonomous trucks being used in regular operations in little more than a decade. (Above) Test trucks run in a truck platoon on a closed course for evaluation purposes earlier this year.

Eight years. That’s how long McKinsey & Company, a global logistics think tank based in the United States and Europe, predicts it will be before autonomous trucks with no humans on board could be routinely running routes in North America.

That stunning revelation is the opening salvo in the first of a five-part report on near-term technological disruption in global logistics. The initial report focuses on the advent of autonomous trucks and the remaining parts will look at the effect emerging technologies such as analytics, e-Commerce, automation in the workplace (not including autonomous vehicles), asset sharing and data and analytics.

The report’s look at autonomous truck trend lines opens by noting that trucking moves about two-thirds of all goods shipped in the U.S. and that truck driving is currently the most common occupation in more than half of all U.S. states. Furthermore, the report warns, trucking remains a “deeply traditional” industry that has experienced “few major or structural changes in the preceding decades.”