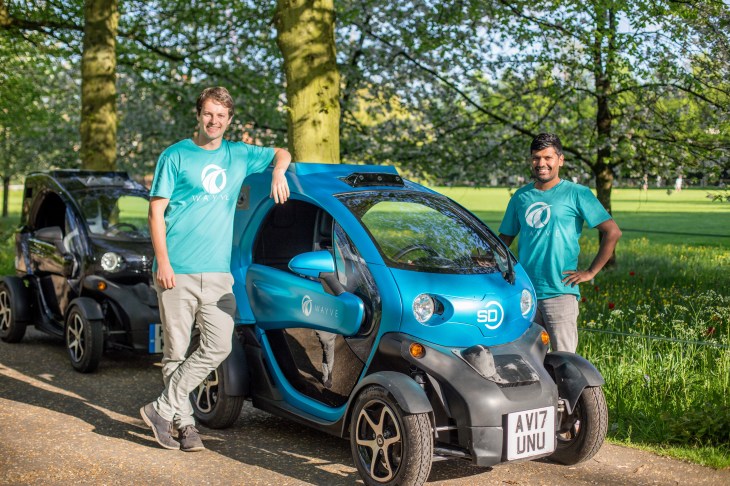 A new U.K. self-driving car startup founded by Amar Shah and Alex Kendall, two machine learning PhDs from University of Cambridge, is de-cloaking today. Wayve — backed by New York-based Compound, Europe’s Fly Ventures, and Brent Hoberman’s Firstminute Capital — is building what it describes as “end-to-end machine learning algorithms” to make autonomous vehicles a reality, an approach it claims is different to much of the conventional thinking on self-driving cars.

Specifically, as Wayve CEO Shah explained in a call last week, the young company believes that the key to making an autonomous vehicle that is truly just that (i.e. able to drive safely in any environment it is asked to), is a much greater emphasis on the self-learning capability of its software. In other words, self-driving cars is an AI problem first and foremost, and one that he and co-founder Kendall argue requires a very specific machine-learning development skill set.

“Wayve is building intelligent software to decide how to control a vehicle on all public roads,” he tells me. “Rather than hand-engineering our solution with heavily rule-based systems, we aim to build data-driven machine learning at every layer of our system, which would learn from experience and not simply be given if-else statements. Our learning-based system will be safer in unfamiliar situations than a rule-based system which would behave unpredictably in a situation it has not seen before”.

To explain his thinking in laymen’s terms, Shah points to the way a human who is relatively proficient in driving in one city can quickly adapt to the differences in a completely new city, without having to be given extra training or instruction beforehand. It may take around 30 minutes or even a few hours to become fully climatized to new driving conditions or environment, but humans don’t need very much new data to do so.

“Humans have a fascinating ability to perform complex tasks in the real world, because our brains allow us to learn quickly and transfer knowledge across our many experiences,” he says. “We want to give our vehicles better brains, not more hardware”.